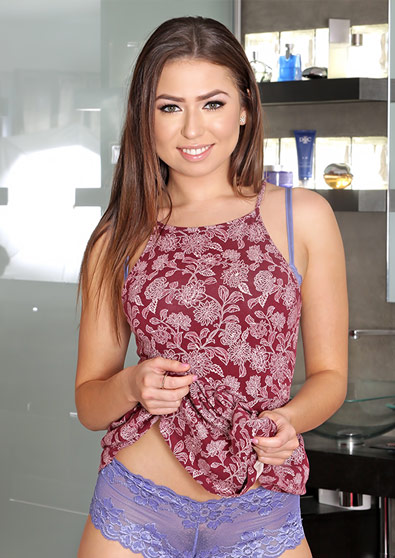 She is a petite, all natural 5 ft 4 in, 100lb straight-up hottie, who loves to please and be dominated. Melissa has long brown hair, hazel eyes and a juicy bubble-butt.

Melissa started her working life as a waitress at a Texas restaurant chain called "Bone Daddy’s". It was here, while she was waiting tables, that she met someone from Miami who told her he could help her break into the industry. While this person never delivered, it was through him that Melissa met somebody who was a performer from Dallas, who in turn gave her the contact details of a performer and agent in Miami. Soon after this, Melissa’s career took off and she quickly signed with superstar porn agent Mark Speigler. Since becoming a "Speigler girl", Melissa’s career has gone from strength to strength, and she was nominated for the "best new starlet" award at the 2017 AVN’s.

Melissa has a "crazy fetish" for saliva, just the sight of it can get her wet. She is also "naturally a pleaser" and is "very much infatuated with oral sex" because of the intimacy achieved through eye contact and the total control she can have on a person with her mouth. Her current favorite sex position is the "pile driver" because it gives her a full view of what’s being done to her pussy and she can’t look away — which she finds very hot. She also has a preference for early morning facials, enjoying the taste and feel of them.

When her performing career ends, Melissa is interested in exploring working backstage in movies, coordinating the lights, camera and sound equipment.

She currently lives in Ventura California with her two cats and sausage dog.